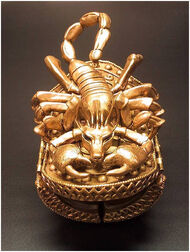 The Bracelet of Anubis was a large golden bracelet that was once worn by the Scorpion King, and would later become the key to summoning up the Army of Anubis.

Worn by the Scorpion King Mathayus in the year 3067 B.C, the Bracelet of Anubis had been a part of the Scorpion King's garb as he attempted to invade the city of Thebes. The Scorpion King had lost the battle after seven years of attempts, and he, along with his remaining army, were cast out into the desert of Ahm Shere. One by one, the warriors died of heatstroke, thirst, hunger and exhaustion until the Scorpion King himself remained, pledging to Anubis as he looked to the skies above that if his life was spared, he would return payment with his soul, along with a pyramid of gold, the thing that he claimed to have been denied by the gods. After his prayer had been made, the Scorpion King looked down and saw a large black scorpion and, knowing it to be a token from Anubis himself, ate the arthropod up, chewing it as the stinger hit his hand. With that, a massive oasis sprang from the desert sands, allowing the Scorpion King to drink from the waters and eventually recuperate.

After his health had been restored, the Scorpion King had been given an army by Anubis that had allowed him to re-challenge the city of Thebes, destroying much of it and taking many lives in the process. Once the battle was won, however, the Scorpion King's life had been taken by Anubis as he dissipated into smoke, leaving behind his golden Bracelet; with their leader dying, the Army of Anubis shared the same fate.

Many centuries later, in 1290 B.C, the pharaoh Seti I had given his daughter, the princess Nefertiri, the task of ensuring that the Bracelet was kept safe as it was placed within a temple that had been designed by the High Priest of Osiris, Imhotep.

The Bracelet had remained within the temple until 1933 A.D, when it had been found by the explorer Rick O'Connell and his wife, the historian, a librarian, Evelyn O'Connell. The Bracelet had been placed inside of a metallic chest that had once been protected by two guards in the past, but as centuries had passed, the two men became mummies, standing in place as they had centuries ago. The chest containing the Bracelet was taken from its resting place, but at that moment, a rushing sound rang out: the O'Connells then knew that the Bracelet was under protection, for the inscriptions around the chest said that whoever opened the chest would "drink from the Nile". With that, a large torrent of water came down the corridors, taking Rick and Evelyn with it, almost drowning them as they took the chest with them. Outside of the chamber containing the Bracelet, Alex O'Connell, Rick and Evelyn's son, had mistakenly caused the crash of the supporting pillars within the main atrium, breaking through the walls and stopping the waters from drowning his parents.

The Bracelet was taken back to London for further study, but the chest containing the Bracelet unlocked itself once it reached the O'Connell's manor. Alex himself opened the chest and took the Bracelet out, putting it on his wrist. Once he had, Alex began to see visions of a journey to far-off destinations: ending with Karnak. Alex tried to remove the Bracelet but could not, instead pulling up his sleeve to hide it from his mother, who had just come into the room. Alex, to pretend that he hadn't opened the chest containing the Bracelet, took the key from its lock and put a statue of a baseball player inside. Evelyn then asked Alex to give the key to the chest, but Alex said that he couldn't find it, hiding the key from his mother. At that moment, a tall warrior named Lock-Nah had come into the room, demanding the chest. Evelyn drew out a sword and told him to leave, but Lock-Nah revealed that he had not come alone, as several other warriors stepped out from behind him. As Lock-Nah stepped forward with his minions, the Medjai warrior Ardeth Bay stepped out from a corner of the room, recognising Lock-Nah: with that, a fight ensued as the cultists all drew out their swords and began to duel Evelyn and Ardeth.

In the oasis of Am-Shere, Baltus Hafez and Loc-Nah spoke of the Bracelet; Loc-Nah wanted Alex killed in his hate but Baltus Hafez cautioned about incurring Imhotep's wrath, and asked his master about the Bracelet. Imhotep said that it was the Key to unlocking Anubis' Army, which a surprised Baltus ordered the Bracelet removed (preferably involving Alex's death or mutilation).

When Rick was running from the pygmies of Am-Shere, when he and Alex made it to the Pyramid, the Bracelet of Anubis clicked and rolled off Alex's wrist, with which he picked up the thing and chucked it a foot away, relieved to be free from its curse. Alex and Rick did not see Baltus Hafez, the sole cultist survivor, steal the Bracelet from its resting place in the sand and slip it on his wrist, becoming its new possessor.

Rick entered the chamber where Hafez stood. Hafez told Rick it was too late, he had awoken the Army of Anubis, and that Imhotep would soon take command by killing the Scorpion King. Rick said that he would see if he could kill Imhotep and Baltus made to chuckle, but then howled in agony as pygmies resting in the statue stripped his arm to the bone, gnawing at the skin. The mummies presumably took the Bracelet too, for it is never seen again in the subsequent events.

The Bracelet of Anubis was a large heavy manacle that was crafted from gold and worn by the Scorpion King in ancient times. The manacle depicted the head of a jackal with the body of a scorpion and sealed itself shut on the wearer's wrist, being unremovable until the wearer reached the golden pyramid located within the Oasis of Ahm Shere, a period of seven days being given to the wearer to reach the pyramid before the sun touched it on the morning of the final day, at which point the Bracelet sucked the life out of its wearer.

Retrieved from "https://mummy.fandom.com/wiki/Bracelet_of_Anubis?oldid=19142"
Community content is available under CC-BY-SA unless otherwise noted.