Cassandra was Memnon's sorceress, and Mathayus's queen and deuteragonist in the 2002 film, The Scorpion King.

She is played by Kelly Hu.

Cassandra was an orphaned as a young girl after the deaths of her loving parents from China by the evil warlord Emperor Han. She ended up as a prisoner as a child and become Memnon's sorceress in her whole life.

She's didn't want to be Memmon's queen, because he's wants the world with chaos before he will become the legend himself and take her virginity and control her life as she's saw his true colors, watching Mathayus' brother getting killed by Memmon's hands in front of him, but she does have the strong-willed, brave and kind soul that she's can't stand to watch innocent people die and destroy their homes by Memmon's rage and falling in love with Mathayus since he's helping her escape from Memmon's tyranny wrath and imprisonment of her life.

She's accepted to marry Mathayus and taking his place as the king and become the legendary Scorpion King.

Mathayus manages to sneak into the sorcerer's tent, where he sees that the sorcerer is actually a sorceress, Cassandra.

When Mathayus is ambushed and meets Memnon himself, who brutally executes his brother Jesup in front of him, and is about to kill Mathayus too. Cassandra, however, tells Memnon that the gods wish Mathayus to survive the night, and to defy them will incur their wrath and cost him his victories.

Mathayus only barely manages to escape Gomorrah, abducting Cassandra along the way, knowing that Memnon will come for her.

Cassandra tries to escape from Mathayus and even tells him that she has been Memnon's prisoner since she was a young child from China. Sympathetic, Mathayus allows her the choice of leaving, but warns her of worse dangers and that she is likely safer with him.

Cassandra, however, uses her beautiful magic to save Mathayus' life by using healing power.

Cassandra has a vision of Memnon and his army slaughtering the entire rebel camp. She informs Mathayus and the prophesies that when the moonlight reaches Memnon's palace, the King on High will become the invincible Scorpion King, and Memnon believes himself to be the one destined to become the Scorpion King. Furthermore, she informs Mathayus that if he faces Memnon, he will most likely die from being shot, but Mathayus assures her that he will make his own destiny and they sleep together.

Soon after, Cassandra returns to Memnon in order to stall him and Mathayus possibly kill him during his last battle leading to his death at arrow and fire explosion in the palace as he's now the legendary Scorpion King and married him as he's take her as his queen.

Cassandra tells Mathayus that she sees a period of peace and prosperity coming, but warns him that it will not last forever. Undeterred, Mathayus decides that they will make their own destiny.

Meeting with Zi Yuan and her daughter, Lin in Himalayas, she's gave her a liquidity immortality potion bottle from the Pool of Eternal Life about her pregnancy of their future and newborn daughter to survive.

A plague hits Mathayus' kingdom. Cassandra dies with inflection by Horus as do most of the population during in the flashbacks. The kingdom falls. Mathayus becomes a wandering mercenary. Mathayus is devastated after he's lost his beloved wife. 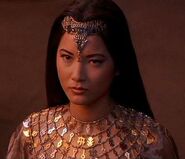 Add a photo to this gallery
Retrieved from "https://mummy.fandom.com/wiki/Cassandra?oldid=20707"
Community content is available under CC-BY-SA unless otherwise noted.