Fell from balcony to her death

Nefertiri was the daughter of Pharaoh Seti I, as well as the previous incarnation of Evelyn O'Connell.

Nefertiri was left motherless as a young woman and was later confronted with the truth that her father was to marry Anck-Su-Namun, a choice that angered her as Anck-Su-Namun was a mere concubine.

Anck-Su-Namun did nothing to remedy Nefertiri's perception of her, as she carried on her own haughty demeanour, and abused her position as Nefertiri's superior.

Seti had entrusted Nefertiri with the task of watching over the ancient Bracelet of Anubis, the final remaining artifact of the Scorpion King, an ancient warlord. One day, for the entertainment of Seti and his courtiers, Nefertiri and Anck-Su-Namun dueled in the royal court with sais, but quickly moved on to other weapons before she was eventually brought to heel by Anck-Su-Namun. It was after the battle had ended with her defeated that Seti made an announcement to his court: Anck-Su-Namun was to be his future wife, as he believed that she could protect him from any conspirators, while Nefertiri would be charged with protecting the Bracelet. Nefertiri was dismayed at the fact that Anck-Su-Namun would become her stepmother, but she did not voice any disapproval, most likely knowing that it would amount to nothing.

Instead, she embraced her father and took note that the High Priest of Osiris, Imhotep was exchanging covert glances with Anck-Su-Namun. As Seti's most trusted consort, Imhotep was held under suspicion by Nefertiri after that.

That night, Nefertiri walked onto the balcony of her room in the palace to take the night air. As she stood there, she saw Anck-Su-Namun in her father's chambers and was stunned to see High Priest Imhotep there as well. To her further shock, the two embraced and kissed but quickly broke apart and separated when Pharaoh Seti himself entered the chambers. Already suspicious due to the presence of Imhotep's priests in the room, Seti immediately spotted that someone else had touched his concubine and demanded to know who had done so. Imhotep then revealed himself and drew the Pharaoh's own sword from his belt. Realizing their intentions, Nefertiri called out to the Medjai, Seti's loyal bodyguards, that her father was in danger. Unfortunately, it was too late and the princess watched in horror as Anck-Su-Namun struck the first blow to her father, stabbing him deeply in the back with a dagger, before joining Imhotep in stabbing the monarch repeatedly until he died. Overcome with horror, Nefertiri inadvertently leaned too far over the edge of the balcony and fell to her death.

Despite having perished, Nefertiri's soul was cast adrift into the currents of time to be reborn once fate deemed the time right, to revenge herself upon Anck-Su-Namun.

Centuries later, Nefertiri was reincarnated as Evelyn O'Connell, the eventual wife of Rick O'Connell a connection which Ardeth Bay noted was no mere coincidence, but established by fate itself. Like Meela Nais, Nefertiri's reincarnation was incomplete, merely enough for Evelyn to resemble Nefertiri and subconsciously recall how to speak Ancient Egyptian.

Some years after her marriage, Evelyn started to remember strange things, namely how to access secret passages and disarm certain traps in places she has been as Nefertiri. These strange recollections enabled her to locate the Bracelet of Anubis, which had remained where she secured it thousands of years earlier.

While chasing the newly revived Imhotep and Anck-Su-Namun across Egypt, Evelyn was suddenly swept up in memories of her previous life, which at that very moment were being relived by Anck-Su-Namun as Imhotep restored her original soul. When the O'Connells finally caught up with Imhotep at Ahm Shere, Anck-Su-Namun murdered her former rival in cold blood. However, Alexander O'Connell and Jonathan Carnahan managed to use the Book of the Dead to revive Evelyn, but this time, she had access to all of Nefertiri's memories and combat skills, which coupled with a few new techniques learned from Rick, were enough to give her an edge in fighting Anck-Su-Namun. Although Evelyn/Nefertiri did not strike her old rival down personally, her actions ensured Imhotep's defeat and Anck-Su-Namun's final, selfish death. Nefertiri's memories and skills remained with Evelyn in the years to come, although Evelyn would retain her personality.

Nefertiri was a beautiful young woman with the typical olive skin of an Egyptian, and black hair that was kept long with bluntly-cut bangs. She had a penchant for sporting printed gowns, and as befitted her royal status, wore copious amounts of gold and even had a combat outfit of gold thread.

Despite being a dignified Princess of Egypt, Nefertiri was shown to be a strong-willed and resourceful woman with considerable combat skills, which she exhibited when confronting the concubine Anck-Su-Namun. She was also a devoted daughter to her father, to the extent where, though she resented Anck-Su-Namun for constantly abusing her, she was still appalled when she saw how her father's concubine and Imhotep were engaged in a secret love affair. When she saw her father being murdered, she was so grieved that she accidentally fell to her death.

The Mummy: The Animated Series

Like in the films, she is the previous incarnation of Evelyn O'Connell (nee Carnahan) and is Anck-Su-Namun's rival. Before Anck-Su-Namun's true colours are discovered, she and Nerfertiri once together traveled to the Temple of Anubis to transport the Scythe of Anubis to a location where it could be kept out of the wrong hands. On another occasion, she met her future incarnation's son Alex O'Connell and his uncle Jonathan Carnahan, who went back in time after Imhotep used the Temple of Eternity to change the timeline. They warned the princess not to trust Imhotep or allow him near the Manacle of Osiris; it is later revealed that she and her father had been suspicious of Imhotep for some time anyway, and Alex's warnings only solidified these suspicions. She helped them fix the timeline by lending Alex a replica of the Manacle to lure Imhotep's future self back into his time. Before Alex left, he told her the answer to a riddle that Evelyn O'Connell would be asked 3000 years later; although confused by this advice he gave her, this would later prove crucial knowledge.

Sometime after these events, Nefertiri was killed by Anck-Su-Namun. When Evelyn O'Connell was mortally wounded millennia later, Jonathan gave her waters from the Lake of Eternity to save her life. However, this inadvertently allowed Nefertiri's mind to take over Evelyn's body, Nefertiri desiring vengeance over Anck-Su-Namun for her murder and betraying Nefertiri's father. Her knowledge of the past proved useful, and she and Anck-Su-Namun fought against one another at the Temple of Anubis, the former summoning Anubis to prevent the latter from having the Scythe of Anubis. Anck-Su-Namun, refusing to let go of her prize, was dragged into the Underworld; her mission complete, Nefertiri's mind let go, allowing Evelyn's return.

The character is named after Nefertiti, was the Great Royal Wife of the pharaoh Akhenaten and the mother of Princess Ankhesenamun, whose name is probably the basis for Anck-Su-Namun's name. The name was likely changed due to the fact that Nefertiti had been dead for several decades by the reign of Seti I (whose father assumed the throne after a period of instability caused by Akhenaten), and because of concerns about "Nefertiti" being mispronounced as something rather more vulgar in English.

A similarly named person was Nefertari, the Great Royal Wife of Ramesses II, successor to Seti I. The fictional Nefertiri would thus be the historical Nefertari's sister-in-law (or, if she had survived, Nefertari herself, as the Egyptian royal family was known to inbreed).

Historically, Seti I's only confirmed daughter was named Tia, although it is possible that Henutmire was his daughter as well. 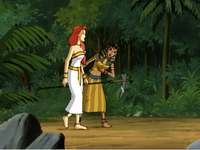 Princess Nefertiri With The Scythe Of Anubis 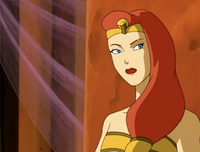 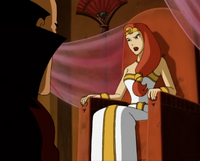