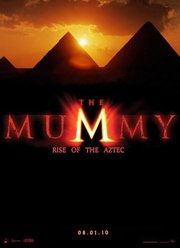 The Mummy: Quest for the Talismans is a action-adventure fantasy novel about a treasure explorering family known as the O'Connells, searching for twelve ancient stone tablet-like puzzles to find an ancient artifact before the evil mummy high-priest Imhotep, resurrected from the dead, finds and use the cursed powerful artifact to conquer the world.

The Mummy 2: Rise of the Memphis

The Mummy 3: Curse of the Aztec

The Mummy 4: The Revenge of Pharaohs

Retrieved from "https://mummy.fandom.com/wiki/The_Mummy:_Quest_for_the_Talismans?oldid=9072"
Community content is available under CC-BY-SA unless otherwise noted.