The Mummy: Secrets of the Medjai 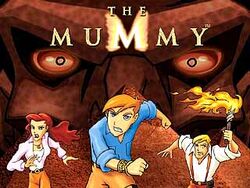 The Mummy: The Animated Series is an animated television series produced by Universal Animation Studios to capitalize on the success of The Mummy Returns.

It premiered on Kids' WB! on the WB network on September 29, 2001. It is set sometime between 1920 and 1934. The characters and plot were derived from the film, but the series could not replicate its success. The poor quality of the animation disappointed fans of the special effects-laden movie. It was retooled and rechristened The Mummy: Secrets of the Medjai for its second season, which began on February 15, 2003. Although the quality is considered to have improved between the first and second seasons, the show failed to find an audience and was cancelled on June 7, 2003. Reruns of the show air on Toon Disney UK.

Based loosely on hit movies The Mummy and The Mummy Returns, the O'Connells find themselves being chased around the world by the undead corrupt High Priest, Imhotep, and his lackey, Colin Weasler, while trying to get the Manacle of Osiris off Alex O'Connell's wrist. This takes their trip across the world, trying to locate the lost Scrolls of Thebes, the only things that can remove the manacle. However, the scrolls had to be destroyed to prevent Imhotep from possessing the manacle. Now in the second season, Alex is trained as a Medjai to combat the mummy as well as facing new threats along the way.

The series consists of twenty-six episodes. Seasons 1 and 2. The series episodes span from the travels in Egypt to around the world, reaching locales such as tropical islands, China, and even New York.

The series follows the O'Connell family as they travelled the world, being pursued by Imhotep and his newfound lackey, Colin Weasler, all while trying to take an ancient wristband known as the Manacle of Osiris off of Alex O'Connell's wrist. Their chase across the globe took them to find the Scrolls of Thebes, which would remove the Manacle, though the Scrolls were all destroyed so that Imhotep would not possess the Manacle. In the second season, Alex began to train as a Medjai so as to combat the mummy, running into various other threats as he trained.

The first season showed the travels of the O'Connells as they escaped Imhotep's grip and sought out the Scrolls of Thebes.

The second season began to show Alex's commencement of training to be a Medjai while facing other dangers.

Universal Studios Home Entertainment released the entire series on DVD in Region 1 in 3 volume sets. They were released in Canada on July 22, 2008 and in the USA on December 16, 2008.

On November 21, 2002, Ubisoft released a 2D platforming video game based on the series for the GameBoy Advance system. Hip Games later released a 3D action-adventure game for PC and Playstation 2 on October 1, 2004. However, the game was not released outside of Europe.

Retrieved from "https://mummy.fandom.com/wiki/The_Mummy:_Secrets_of_the_Medjai?oldid=20251"
Community content is available under CC-BY-SA unless otherwise noted.