The Mummy: Tomb of the Dragon Emperor

The Mummy Returns is a 2001-adventure film produced by Universal Pictures, and the second installment of the studios’ remake Mummy trilogy. Starring the returning cast of Brendan Fraser, Rachel Weisz, Arnold Vosloo, John Hannah and Oded Fehr, and introducing Freddie Boath, with Dwayne “The Rock” Johnson and Adewale Akinnuoye-Agbaje in new roles.

The Scorpion King soon finds himself the last living member of his army, all the others having died from the desert heat, exhaustion, and lack of food or water. At that point, the Scorpion King himself is dying, and in his last moments, he prays to the god Anubis, pleading for the chance to win one last battle in exchange for his soul. In response, the god sends out a large black scorpion from the sands, which the warrior chews up, despite its successful attempts to sting him, which results in a great oasis sprouting from the desert.

5,000 years later, in 1933 A.D, Rick O'Connell has long since married Evelyn Carnahan and sired a son, Alex O'Connell. The O'Connells have reached a temple along the banks of the Nile where Evelyn seeks the Bracelet of Anubis, the emblem of the Scorpion King. Evelyn knows about the temple and how to access the Bracelet from visions that she has been having. As Evelyn looks at some carvings on a wall, Rick is told by his son Alex that the tattoo on his wrist is alike to a symbol that appeared in the atrium of the temple that they are exploring. Later, three thieves, Spivey, Red, and Jacques, arrive to retrieve the bracelet. While Red goes after Rick and Evelyn, Spivey and Jacques stay behind to look for other artifacts. Meanwhile, Rick and Evey find and enter the chamber where the bracelet is kept. Back at the main chamber, Alex secretly harasses Spivey from on top a wooden platform, but is later found out by Jacques.

The scene then turns to an excavated Hamunaptra. The excavators are paid by a cult lead by Baltus Hafez, curator of the British Museum. In a tent, a warrior named Lock-Nah states that the Book of the Dead gives life. A woman named Meela Nais also states that the Book of Amun-Ra takes life away. Just then the excavators unearth a swarm of scarabs that devour some of the excavators and a couple cultists. The cultists then force the scarabs back into the pit using flame throwers. Just then, a call sounds out, and Hafez exclaims, "We've found him." Most of the excavators and cultists rush over to the site.

While Lock-Nah and a handful of armed cultist thugs head to confront Evelyn O'Connell as to the chests whereabouts, Hafez himself, accompanied by Meela, Shafek and two other thugs head upstairs to interrogate Rick O'Connell about it. The cultists find Jonathan Carnahan instead, with a woman named Sheila, and the cultists thus mistake him for O'Connell. The cultists force Sheila out and confront Jonathan about the Bracelet of Anubis, but Jonathan, thinking Hafez is working for a man named Johnny that Jonathan was indebted to, pleads for more time to pay what he owes. Hafez stated that he knows no-one named Johnny, and began to ask about the Bracelet of Anubis. Jonathan states honestly that he has no idea what they are talking about, but Hafez does not believe him, having Shafek take a dagger and hold Jonathan back. Jonathan then lies, saying that he lost the Bracelet in a card game, and at that moment, Hafez's attention is diverted as he eyes the Spear of Osiris in Jonathan's hand; Jonathan had claimed the Spear years ago when it was taken from Hamunaptra. Meela Nais then walks into the room with a basket in her hands, asking where Jonathan's wife is, believing him to be O'Connell. Jonathan lies that Evelyn had gone off to Baden-Baden or Tibet, but this excuse does not register with Meela, who pulls out a venomous Egyptian asp from the basket and brought it closer to Jonathan so that it would bite him. As Meela steps further with the snake, Jonathan lies once more and stated that the Bracelet is in a safe downstairs, furthering his lie and giving a combination; Meela was not distracted by this, as she moves closer with the asp in her hand.

At that moment, Rick O'Connell steps in, seeing Jonathan being held back and tortured with a snake and a dagger. O'Connell, thinking that it is another of Jonathan's wild parties, asks the "guests" to cease their activity, but is stopped as Meela throws the asp at O'Connell. O'Connell catches the snake and throws it back at one of the cultists, and in a reciprocal move, another cultist throws a dagger at Rick, almost hitting him, but dodging once O'Connell throws it back, hitting another cultist instead. Another cultist open fires with a machine gun, but O'Connell and Jonathan escape, with Jonathan pocketing the Spear from the curator's hands.

Alex is captured by the cult who have resurrected Imhotep; they wish to use Imhotep's power to defeat the Scorpion King, which would give him command of the Army of Anubis. The cult, led by Baltus Hafez, the curator of the British Museum, includes a warrior named Lock-Nah and Meela Nais, the reincarnation of Imhotep's love Anck-su-namun. The O'Connells set out to rescue Alex, accompanied by Evelyn's brother Jonathan and the Medjai Ardeth Bay. Rick's associate from his past adventures, Izzy, a pilot, provides the group transportation.

The bracelet of Anubis gives Alex visions, directions to Ahm Shere that the cult follows. At each location, Alex leaves clues for his parents, who follow in Izzy's dirigible. Imhotep uses the Book of the Dead to give Meela Nais the soul of Anck-su-namun. Lock-Nah discovers that Alex has been leaving clues, so Imhotep makes a wall of water that attacks the dirigible. The O'Connells crash in Ahm Shere. Izzy stays with the dirigible in hopes of repairing it. The O'Connells attack the cult, and both groups are attacked by pygmy mummies. Rick retrieves Alex while Ardeth Bay kills Lock-Nah. They escape from the pygmies, which kill most of the cult except for Baltus. Imhotep and Anck-su-namun are unharmed due to Imhotep's powers.

Return of the Scorpion King

Alex and Jonathan go to help Rick. It is revealed on carvings on the walls that the scepter that Jonathan has been carrying extends into a spear that can kill the Scorpion King. The Medjai seemingly defeat Anubis' army despite heavy casualties, but see that they have only defeated the vanguard, and the full army is charging towards them. However, before the Anubis warriors hit the Medjai lines, Rick succeeds in killing the Scorpion King, sending him and his army back to the Underworld. The Scorpion King's death causes Anubis to turn the oasis back into a desert, and the oasis is being sucked into the pyramid. Rick and Imhotep are hanging from the edge of a pit that leads into the Underworld. Evey risks her life to save Rick, but Anck-su-namun refuses to save Imhotep. Seeing Anck-Su-namun abandon him, Imhotep willingly lets go. Anck-su-namun later falls into a scorpion-filled pit and dies. 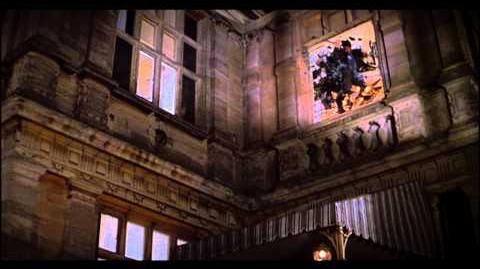 The Mummy Returns - Trailer
Add a photo to this gallery
Retrieved from "https://mummy.fandom.com/wiki/The_Mummy_Returns?oldid=19132"
Community content is available under CC-BY-SA unless otherwise noted.