View source
watch 01:36
We're Getting Mutants in the MCU - The Loop
Do you like this video?
Play Sound

The Scorpion King 2: Rise of a Warrior

The Scorpion King is a 2002-action-adventure film produced by Universal Pictures, and is a spin-off to the studios’ remake The Mummy trilogy. The movie starred Dwayne “The Rock” Johnson in his first-ever lead starring role as the warrior himself, Mathayus, and with a supporting cast by Michael Clarke Duncan, Kelly Hu, Steven Brand, Ralf Moeller, and Grant Heslov.

The film begins in Ancient Egyptian times predating the construction of the Pyramids, and we are introduced to the bloodthirsty conqueror Memnon (Brand), renowned for his exceptional sword-skills. He and his vast army are campaigning across the known world, slowly defeating and taking over the free lands…until only a small group of rebels remain to challenge him.

The wise King Pheron summons a trio of Akkadian mercenaries, lead by the eldest brother Mathayus (Johnson). They are hired, to the annoyance and disapproval of the Nubian warrior Balthazar (Duncan), for an important mission to assassinate the sorcerer that provides Memnon with predictions and visions of the future. This gives the warlord the advantage of knowing exactly when, where and what the rebels groups plan to do, thus allowing Memnon to alter his strategy to fit in his favor, knowing the battle outcome. The Akkadian brothers accept when paid with priceless blood-rubies and depart with Mathayus vowing to succeed in their assignment.

The three assassins sneak into one of Memnon’s war camps, with the intent of finding the sorcerer and killing him/her. However, King Pheron’s traitorous son has betrayed the Akkadians as well as the rebels by warning Memnon of the attack, and the assassins find themselves in a giant trap. Mathayus realizes that they have been set up, and takes cover. Unfortunately a hail of arrows kills his two beloved brothers. Mathayus then covertly slips into the sorcerer’s tent, and is shocked to find the magician is in fact a woman named Cassandra (Hu), who knows his name and mission. Just then Memnon’s soldiers arrive and restrain the Akkadian.

However, in an unexpected move, Cassandra pleads to spare the Akkadian from death by Memnon or any of his forces’ hands. He decides to have Mathayus knocked unconscious and buried up to his neck in the desert, to be eaten by hungry fire ants. Mathayus manages to escape this gruesome end with the help of a mischievous horse thief named Arpid (Heslov), and they travel to Memnon’s great city of Gomorrah.

Mathayus succeeds in abducting the sorceress, and brings her to the wasteland called the valley of the dead, planning to use her as a hostage to draw Memnon to him so that the Akkadian can avenge his brothers. However, Memnon has sent his top warrior Thorak and a few others to retrieve Cassandra and kill Mathayus instead, and the Akkadian is forced to battle these foes within a ferocious sandstorm. In a final standoff with Thorak, Mathayus is stabbed by an arrow dipped in scorpion venom, mortally wounding the Akkadian and poisoning his bloodstream. Cassandra manages to heal Mathayus with her mystical powers, but states that he now has scorpion blood flowing in his veins…

The group meets up with an ambitious inventor (Hill) who has ran away from Gomorrah after being accused of treachery. He has created an advanced primitive form of Chinese ‘magic powder’ (gunpowder) which can create massive balls of fire and tremendous explosions. The man joins the travelers as they reach an Oasis ruled over by Balthazar, who is displeased at Mathayus’ intrusion. The two warriors end up attacking each other out of anger, and after a brutal fight Mathayus prevails, claiming that the rebels must stand against Memnon or die running.

That night, Cassandra has a vision of the rebels being slaughtered by Memnon’s armies, and decides to return to Gomorrah in an attempt to distract the warlord while Mathayus leads a band of rebels in a siege of Memnon’s palace. Memnon realizes her treachery, and is attacked by a vengeful Mathayus. As the two mighty combatants erupt into an epic sword duel, down below beneath the building Arpid and the inventor have stocked sacks of ‘magic powder’ under the foundation stones. The gunpowder is lit, and erupts into a mammoth explosion, which blasts away Memnon’s soldiers just as they are about to overcome the brave rebels. And atop the palace roof, Mathayus finally avenges his family by shooting Memnon straight in the gut, knocking the warlord off the roof falling to his death. Victorious, Mathayus and Cassandra together look down at their relieved companions, and Memnon’s armies then bow to the Akkadian, their new King, as per the law of the horde.

The next day, Mathayus and Cassandra bid farewell to Balthazar, who now finally respects the Akkadian and wishes him well in his rule. The royal couple then walks back through the walls of the Canaan city, as Mathayus, once a mere assassin who cared nothing for the wars against tyrants such as Memnon, finally accepts his destiny as the man he was born to be: the Scorpion King…before a final warning by Cassandra that the peace won't last. 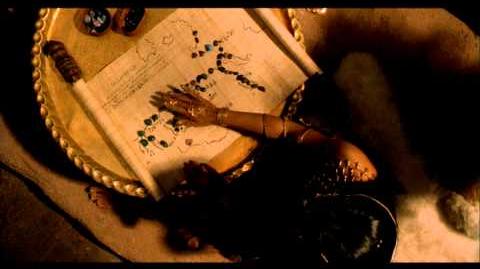